How Reclamation District 1000 Combats Flooding and Keeps You Safe

Every year the Natomas Basin gets showered with rain, whether it be significant or little rainfall. Depending on how significant the precipitation in California is, flooding can become an abrupt and critical issue. Why? The Natomas Basin is a low-lying region between the American River, Cross Canal, Natomas East Main Drainage Canal, and the Sacramento River. Because it is low-lying and surrounded by bodies of water, the Natomas Basin is one of the most at-risk regions for catastrophic flooding in the nation. Generally, the lower the altitude, the worse flooding can be. So, what if the Natomas Basin experienced a catastrophic flood? To understand the effects a flood would have, a brief review of the basin’s history is helpful. Let’s begin.

In 1862, before the urbanization of the Natomas Basin, the area was mainly farmland. Northern California was hit by a series of storms deemed “The Pineapple Express,” and relentless rain for weeks ensued. The result was devastating. The City of Sacramento was submerged under 30 feet of water, and countless lives and properties were lost.1 The flood was caused by poor drainage of water from the valley. Subsequent reconstruction efforts raised modern-day “Old Sacramento” by 15 feet.

Severe storms followed in the years 1986, 1995, 1997, 2006, and 2017. These storms brought abnormally high amounts of rainfall to the central valley and caused rivers to rise significantly. Despite the strain on the levees in the Natomas Basin, they remained relatively unharmed during these storms.2 Levees are the walls bordering the river that contain the river and prevent it from overflowing as it flows through a valley.

Beginning with the Gardenland neighborhood by the American River, the Natomas Basin began urbanization in the 1950s-1960s due to its proximity to downtown Sacramento and the potential for growth. Shortly after, the Sacramento Metropolitan Airport was built in 1967, followed by the construction of a new pumping plant to drain increased runoff from the airport. The North and South Natomas regions also saw expansion in business and residents in the 1990s. As a mechanism to deal with the increased runoff from the significant urbanization, the district began using large storage detention basins to slowly seep runoff water into the main drainage systems and not overload them.3

A levee breach would most likely cause a large-scale flood in the Natomas Basin. A levee breach is when a levee that borders and contains a flowing body of water such as a river or canal gives way partially or entirely. Levee failures are more likely when the water level is high. If a levee were to fail, the consequences would be catastrophic. Hundreds of thousands of lives would potentially be lost as well as billions of dollars in damage. Floods of this magnitude can have nationwide consequences as well. Northern California is a major food source for the nation, so the nation would likely suffer product and food shortages. As we think about the potential consequences of such a terrible situation, one might ask, what can be done to prevent this?

Helping to prevent flooding in the Natomas Basin, there are canals, drainage ditches, pumping plants, and reinforced levees along the waterways mentioned earlier surrounding the basin to drain and contain water into the Sacramento River.

Reclamation District 1000 (RD1000) focuses on maintaining levees and drainage systems, which involves clearing vegetation from levees, regularly inspecting the levees, and making any necessary repairs. This maintenance allows the levees to be in optimal condition and resist erosion as the river flows, thus preventing flooding. While levees contain the river and make it difficult for the river to spill over, a high river puts considerable pressure and stress on levees. Levees are typically built to withstand this pressure, but it is not always ideal for the river to be so high, as the levees become more susceptible to damage and premature decay. Drainage systems help control the flow of water into the river and prevent excessive pressure on the levees.

For example, a wetland is an area of dense vegetation and absorbs a large amount of stormwater. It is a natural drainage system that takes advantage of existing vegetation and mitigates water entering the river. Weeds and grasses absorb the rainwater until saturation, upon which the now runoff water flows into the river via a drainage canal. Wetlands are not always practical. Constant urbanization prevents wetlands from being preserved in some areas. Instead, RD1000 resorts to more urban-friendly drainage systems when needed, such as a retention pond.

Retention ponds are artificial bowl-shaped pieces of land that collect runoff water from urban areas and release the water slowly into the river. Retention ponds often include the ponds in residential areas that many community members have become familiar with. Since urbanization can prevent plants from growing and absorbing water, there is an increase in runoff water. This excess runoff water makes its way into the retention pond, often through storm drains. After the water inside the pond reaches a certain level, water is released in a controlled fashion into the river. The retention pond and wetland are examples of drainage systems that mitigate water flow into the river and help prevent high pressure on the levees.

Despite all of these efforts, there is still a small risk that the levees could fail under pressure, and this is where the Natomas Levee Project (NLIP) comes in.

Congress approved the Natomas Levee Project in 2014. It is currently underway to provide 200 years of flood protection to the Natomas Basin. Sacramento Area Flood Control Association (SAFCA), the Central Valley Flood Protection Board, The US Army Corps of Engineers, and RD1000 all work together to ensure that the 42 miles of levees surrounding the Natomas Basin are upgraded and at-risk areas are repaired. The project is expected to be completed in 2024.4. 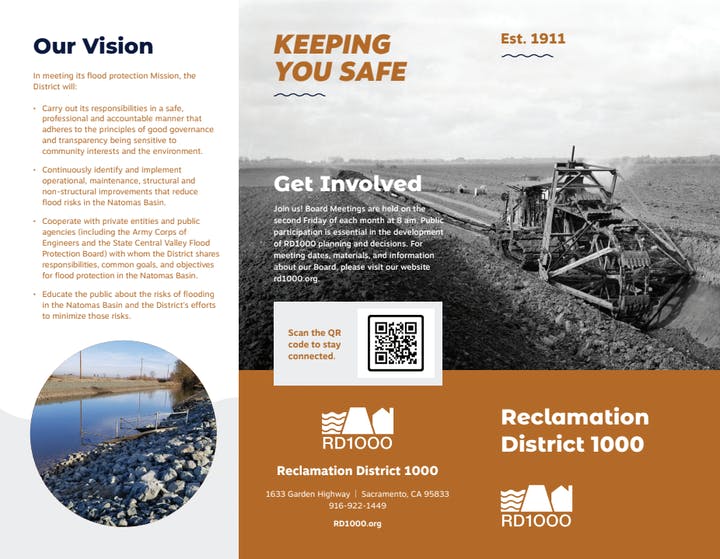 Learn more about who we are at RD1000 and how we serve the Natomas Community! 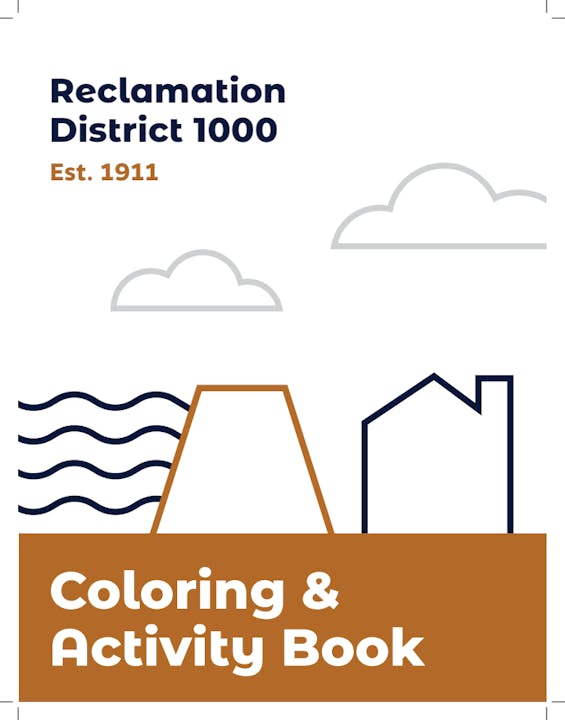 We’d like to introduce ourselves to you and your family and the work we perform to protect the Natomas Community. We’re providing this coloring/activity book to share with you all the ways RD 1000…

Reclamation District 1000 (RD1000) is a California Special District created in 1911. Our Mission is flood protection for the Natomas Basin by providing for the public’s health and safety by operating…