Effective in 2020, District Elections in Reclamation District No. 1000 are held on the second Tuesday of November, in even-numbered years. Seats on the District’s Board of Trustees are designated and elected as Parcel Seats (one vote per parcel); Assessment Seats (votes allocated according to assessment roll) or Resident Seats (one vote per resident). Water Code § 50780.2 et seq. The distribution of Parcel, Assessment, and Resident seats on the 7 member board is dictated by the proportionate land uses in the District, pursuant to Water Code § 50780.18. Votes are assigned to each parcel and voter according to the provisions of the Water Code, as follows:

At present, the District’s Board of Trustees is composed of 4 Assessment Seats and 3 Parcel Seats. The provisions of Water Code 50780 et seq dictate the allocation of votes when each of these seats is open for election.

Pre-election procedures involve the preparation and mailing of ballots and the set-up of materials for canvassing the returned ballots.  They are taken from the general election laws found at Election Code sections 4000 and following, wherever not inconsistent with the Reclamation Act election procedures.

1.                  Notice of General Election and Nominating Petitions.  The District will publish a Notice of General Election and Notice of Nominating Petitions no later than 7 days before nominations are due to be submitted.  Water Code § 50731.5. If the election includes the balance of an unexpired term, the notice shall state that the petition must indicate whether the nomination is for that unexpired term.  This notice shall be published in a newspaper in each county in which any of the district lands are located, and posted in the District office.

3.                  The Election Board.  An election board consists of three landowners of the District, or their legal representatives, and shall include one inspector and two judges of election.  The election board shall be appointed by the county board of supervisors at the request of the District.  Water Code § 50700. District personnel will identify and recommend election board members, who may not be candidates or the family members of candidates. The Election Board members shall be responsible for overseeing the count of the ballots; ruling on disputes or challenges to a ballot; and ruling on disputes or challenges to the qualifications of a voter.

7.                  Ballots.  The ballots shall give the names of the trustee candidates.  Ballots shall be numbered consecutively and there should be sufficient extra ballots to permit the Election Board to replace spoiled ballots. Sufficient ballots should be prepared for the election at least 20 days prior to Election Day. Election Code § 10527.

8.                  Providing Ballots to Voters.  The District shall deliver to each voter in the District a unique ballot; a return/identification envelope, with postage pre-paid; and a voter pamphlet containing candidate statements or any additional information necessary to cast votes. The identification envelope will include a declaration under penalty of perjury that the voter is eligible to cast votes in the RD 1000 election.  The District shall be entitled to rely upon this declaration in determining the qualifications of voters. The District shall provide these materials to voters no earlier than 29 days before the date of the election and shall complete any mailing of ballots no later than 10 days before the date of the election.  Election Code § 4101.

9.                  Consolidation of Ballots. When a Parcel Seat or Assessment Seat is up for election, the District may choose to consolidate the votes of a single landowner onto one ballot.  For example, where one landowner owns 10 parcels, each entitled to one vote, the District in its discretion may choose to issue a single ballot with all 10 parcels and votes consolidated. The District may also, at the request of a landowner, cancel previously issued ballots before the close of polls in order to issue a single consolidated ballot for that landowner.  In either circumstances, the particular parcels combined and/or ballots re-issued will be carefully recorded on the Voter List.

The District shall assemble at least 4 individuals to canvass the votes.  Of these, one person will read from the ballot, one will keep watch for any error or improper vote, and the other two will keep the tally. The members of the Election Board may serve in any of these rolls.  In the event of a disruption or impropriety, the Election Board Inspector may excuse anyone from canvassing votes and enforce that order.  Election Code  § 15152.

2.                  Addressing Challenges to Voters: The District will make a copy of the Voter List available for inspection by any person who may wish to challenge any voters.  Election Code § 15105.  All challenges must be made before the return envelopes are opened.  This procedure protects the privacy of voters while allowing challenges to voters as required by law.  A return/identification envelope may be challenged on the grounds that (1) the voter is not the owner or legal representative of an owner of land in the District; (2) that the parcel’s votes have already been cast; (3) that the ballot was not received within the time provided by the Elections Code; or (4) that the person signing is presently on parole or imprisoned for a felony, and therefore ineligible to vote. The challenger has the burden of establishing extraordinary proof of the validity of the challenge, because of the absence of the voter.  Election Code  § 15106.  Any doubt in the interpretation of the law should be resolved in favor of the challenged voter.  Election Code  § 14251.

5.                  Tally of Votes: As the vote is read from the ballot, two canvassers will each record the votes cast on separate tally sheets. Election Code  § 15277. If the tally must be suspended at any time, the tally sheets will be marked with the date and time that the tally was suspended, and will be placed with the remaining ballot materials in a secured and tamper-proof container, until such time as the count may be resumed. Immediately on completion of the tally, the persons keeping each tally shall draw two heavy lines from the last tally mark to the end of the line and initial the lines.  The total number of votes for each candidate shall be recorded on the tally sheets in words and in figures.  Election Code  § 15277 (c). 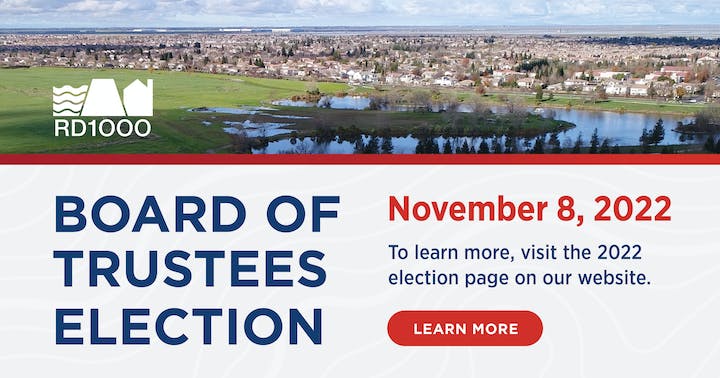 Reclamation District No. 1000 (RD1000) is a Local Special District responsible for flood protection for your property. As a property owner within the boundaries of RD1000, you can participate in the…

The District is governed by a seven-member Board of Trustees elected by the property owners within the Natomas Basin.